What could make airport service experience more pleasurable for transfer passengers? Well, you could get some ideas as Kirsikka Vaajakallio and Jaakko Wäänänen from Diagonal, as well as Juha Vasko from Finavia presented their Travellab project at Service Design Breakfast last week. Diagonal’s Travellab is also a candidate for Service Design Achievement 2015 in Finland.

Diagonal created the Travellab concept, which is a model for testing ideas at the airport. More precisely it’s a model for rapid prototyping and idea ranking created for Finavia to improve the transfer experience at Helsinki Airport. It’s also a great example of using service design tools and design thinking in a creative way to develop services. 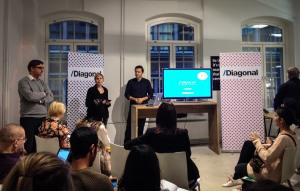 Background of the project

Starting point for the project was Finavia’s strategy to make the Helsinki airport the most desired transit travel airport and to support this goal the Travellab was created. The project started with a positive problem as Finavia had been gathering service ideas during the years and already had 200+ existing ideas for enhancing the customer experience at the airport. However, some help was needed and the brief for Diagonal was to design a model for Finavia for prototyping and validating ideas in a consistent way. It had to be taken into consideration that transfer passengers spend relatively short amount of time at the airport, approximately 1,5h.

With the brief in mind Diagonal then created the Travellab concept. By using their idea funnel technique, they first started by reducing the ideas from 200+ to 40-50 ideas, and in the end came up with 12 prototypes that were tested during the project (picture below is from the presentation). Another important focus was on measuring the impact and how that should be done, as well as what kind of business cases there could be for future purposes. Targeted benefits were also agreed before starting the project, mainly de-risking through prototyping, communicational benefits and maximizing media coverage, as well as strategic growth target of the airport.

During the Travellab project different ideas that have a true impact on the transit travellers’ experience were tested and the experiences was measured, assessed and further developed. After kick-off and preparation phase, Lab 1 and Lab 2 phases were the main prototyping periods taking altogether eight weeks. Finally, impact on customer experiences was measured and analyses were made. Diagonal also had international trainees to help in the project to be able to get the feedback in several languages. It was very important that the work was done together with the passengers, who loved testing the prototypes. Additionally, Finavia had a customer insight research ongoing in parallel so that the inputs from the research could be used for Travellab project.

In the below video you can see the Travellab in action. Yoga gate was the biggest hit of the prototypes.

Outcomes of the project

The results of the Travellab were systematically gone through with Finavia for their future actions. Diagonal also created a model for prototyping for Finavia’s further use. The model includes the experiences, challenges, learnings and knowhow that was gathered during the Travellab project. Furthermore, Diagonal created a ranking model that Finavia can use for evaluating prototyping results and to make investment decisions. Development work at Finavia is currently ongoing.

Travellab outcomes in numbers (picture from the presentation).

I think the Travellab project really showcased the impact and importance of prototyping and co-creating with the customers. It was also interesting to learn a bit more how airports operate and how the moneyflows are organized but that’s another topic altogether. As a sports lover I have to say that my personal favorite of the prototypes was the yoga gate and I hope that service will be available in the future too.

If you are interested to find out more about this project, go check out the whole Service Design Breakfast presentation.