In the sixth Service Design Breakfast on 28th of November 2012, Jouni Tuominiemi, HiQ, started with a long introduction about his company and about his background. Later on he opened up E-learning topic. He pointed out that nowadays the traditional view about e-learning has changed. It is not anymore virtual classroom sessions but it also covers interactive study materials, social media and done in physical classroom and in help of tutor / instructor. He told that e-learning as a term is an old fashion way of naming things, and it should be used as such due to fact of video contents or social media interactions. He opened the abbreviation LMS, telling that nowadays whole e-learning systems are integrated together under Learning Management Systems, which supposed to be a central management unit. 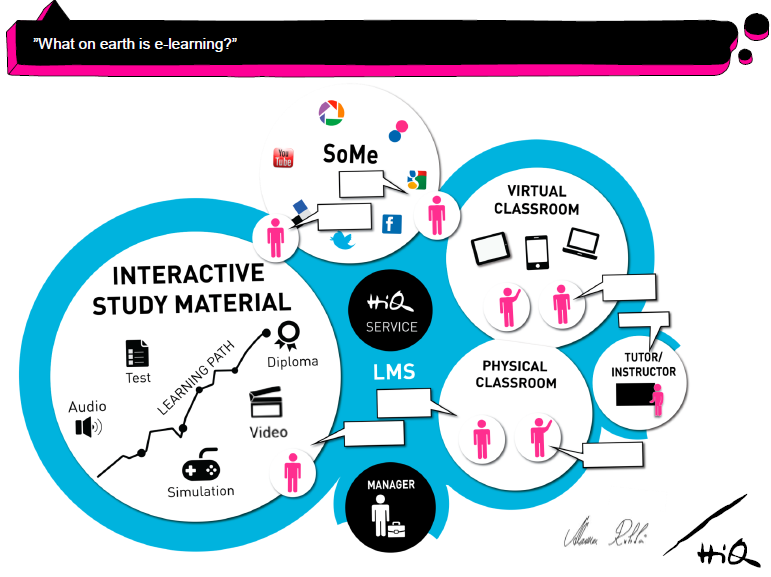 Later in his presentation, he stressed that not every service is simple. If you would like to build professionally looking system you need to incorporate a lot of features and there should be simple connection to other subsystems. He believes that investing money on those kind of systems should be to simplify the system itself and to instruct the users to use it correctly. He pointed out that properly made interactive study materials is a great help for people and it is cost effective way of communicating best practices.

What should not be forgotten is the fact that service design is taking significant role process of creating e-learning solutions. He indicated that there are several things that might be problematic while implementing those new solutions in the organization. First of all, he mentioned about so called “Morale curve” which represents the customer emotions within the time. He stressed at this point that when you are implementing a new service, there is always a phase where after shock there is coming depression caused by changing entirely the service. 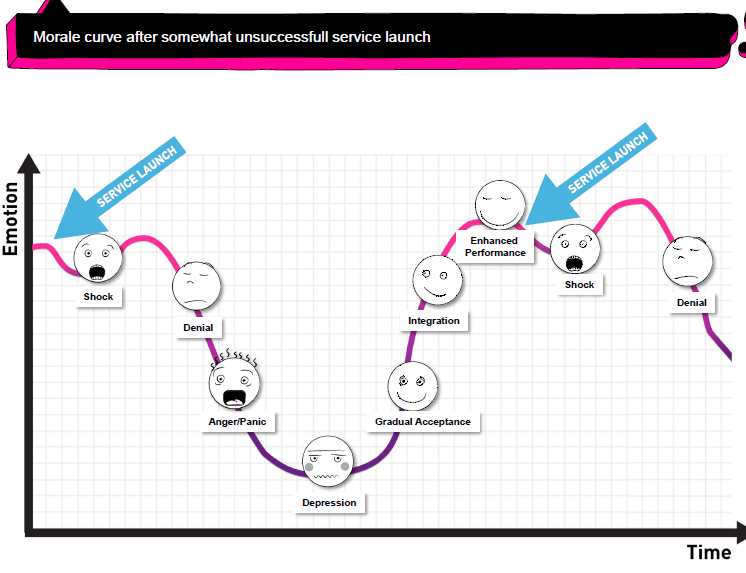 What is the most important is the fact that this phase should take as short time as possible (more mild) and there should be some mechanisms to put people’s excitement of new service back on track. 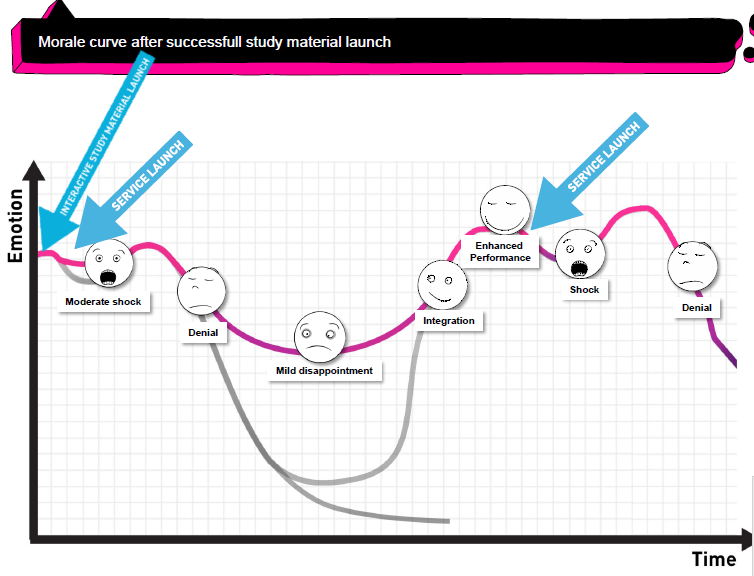 He thinks that involving end users in early stages of design could significantly help to moderate the shock caused by implementing a new service. 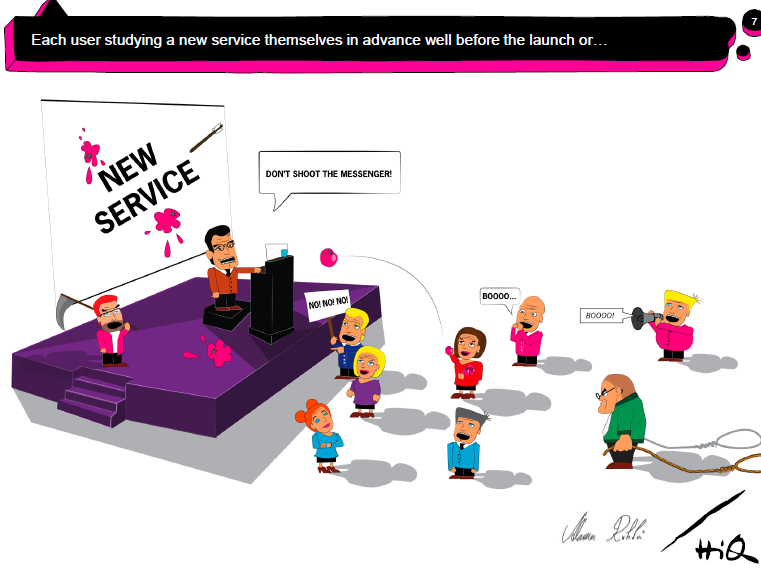 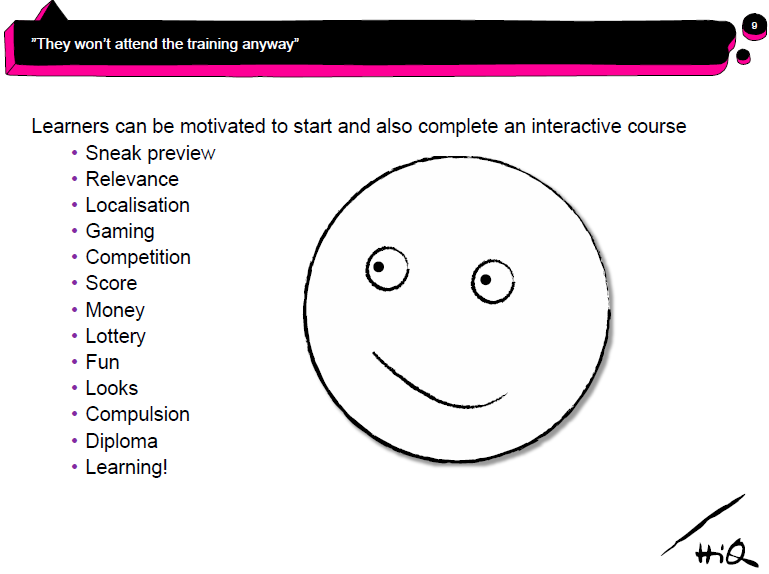 He gave examples of several motivation factors that can be seen above (Figure 5). He explained all of them one by one stopping longer on Relevance and Localization. He told that this is a very important factor because there might be many thousands of users around the world using the service and this service must be relevant for their needs and should support different culture’s needs. Tracking the actual implementation is in the hand of manager who is managing LMS. “Targeting the correct audience and correct timing is the thing to do.”

Saying frank, that was the first breakfast when I felt bored almost immediately after it begins. I do not know if this was due to fact of easy subject or the way how lecturer present the topic. Even “morale curve” which supposed to be a flagship thing of the presentation, wasn’t anything that I would not know from the past. The only thing what I actually liked was the way of stressing out that design process should involve end users as soon as possible to nivelate problems that could occur later. As Leela Damodaran expressed in chapter “User involvement in the systems design process-a practical guide for users” of book Behaviour & IT, 1996, VOL. 15, NO. 6, 363-377, “The users should be able to influence design, not merely `rubber stamp’ it”. She stressed there that to be successful, users involvement should engage users having strong identification from the process point of view and the outcomes. I fully agree with it and this was in my opinion something, what Jouni forgot in his presentation. Daniel Augustyn

Thanks to e-learning the options are endless, for instance: have had the chance to experience courses in Princeton or Harvard University through websites that offer non-credit full courses videos of these and other universities that I couldn’t otherwise attend to.

As Jouni says, one of the most interesting aspects of e-learning is creating a successful experience for it to work. It was interesting to see the emotional factors that go into play when designing an e-learning experience. Undoubtedly, now days it takes an enormous amount of self motivation to take it as serious as one would out of a virtual world.

Thanks to e-learning we’ve come a long way and the future looks very promising. Hugo Molina

Jouni brought an interesting topic to the Breakfast, one that it will never be out of focus. People need to learn and increasingly are looking for online and fast ways to keep updated. The information available in books are sometimes staked in the past and can’t be actualized. Digital learning materials can be easily updated. Kids and teenagers (Generation Y) have a new way of thinking they grow around technology and the learning methods need to follow their minds. How could we as service designers produce more interesting learning services that could be more valuable to them and draw their attention?

I worked in four different e-learning companies with different methods and manners of reaching users, but all of them had in mind customization for teachers, students, parents, school, sometimes companies, departments and employees. The users and their needs were the focus. With LMS is possible to build a platform where the interface views could be modified, permissions set, using SCORM (Sharable Content Object Reference Model) data from the tests, participation and different contents can be collected and students can be evaluated, with gamification features and methods users can be engaged and have fun learning, among of others.

In Brazil where I came from the e-learning methods as “EAD” (Distance education) are spreading to the whole country as a way of accessibility for the ones who don’t have access to education (as small villages far from the big cities) or the ones that don’t have time to go to school.

New learning methods, mainly digital ones are a long conversation and still need improvements. It looks a very interesting and promising area to a professional specialization. Jane Vita Costa

As Jouni mentioned during the breakfast, not every service is simple; often there are lots of unnecessary features, especially if it’s meant for professional use. That raises a question of whether you should invest your money and time in simplifying the service or in providing the manuals. With a good service design you can ensure that everyone is able to use your service, of course with the help of special support materials and manuals. Materials however should not replace clean service design, but be additional support for users.

Another idea that I liked was that one should be launching materials early enough before the service launch, involving end users in the early stages of service design. By doing so, you can make the first shock more moderate. It also makes the users feel more exclusive as they get the access to a new service earlier, even if it is just a sneak preview and the system doesn’t yet work properly. Ekaterina Zhiteneva