Service Design Network Finland held the second Business Meet-Up event which was hosted by Nordea, one of the largest banks in Northern Europe with 10 million customers (of which 4.6 million are also e-customers), 1,100 branch offices and 29,000 employees, in its permises on Keskuskatu, Helsinki.

Representives from different companies, agencies, state administration offices took part in the event in order to share and gain knowledge on internal service design activities. The first speaker, Pontus Slotte, Head of Management Support at Nordea Private Banking, introducedd the service design that helped Nordea improve their customer experience. He shared with us the new higher figures: on a scale to 10, the customers´ average experience currently stands at 9,19.

The next presentation was held by CEO Timo Kaisla of the real estate agency SKV. The other key players in the industry call SKV “the Center Party” (keskustapuolue) of real estate because it is active mostly outside Ring road 3 (Kehä 3). SKV controls more than 30 % of the market outside Helsinki in places like Joensuu, Kuopio, Jyväskylä etc. Previously, Mr. Kaisla used to work in a service design agency. When he was asked to join SKV, he insisted on being able to use service design methodology in order to improve the company. And he succeeded with the help of SD tools developed by a small Helsinki-based boutique company . This month (November), SKV has introduced three brand new services to the Finnish market.

One of them is the “Story of your home” (Kodin tarina) – a new way of selling houses with the help of a written description, pictures and video. Mr. Kaisla says: Only after the seller and the buyer close the deal in a bank, the buyer starts asking “Where do you buy milk on Sundays?” or “What is the best school in the area?”SKV´s solution is to utilize that information in the beginning of the house selling process. In Finland, only 10 % of real estate transactions are conducted by the owners themselves. The rest lie in the hands of professional real estate agencies. This is one way how to increase the chances of selling a house. Their motto is: NOTHING SELLS BETTER THAN A GOOD STORY! 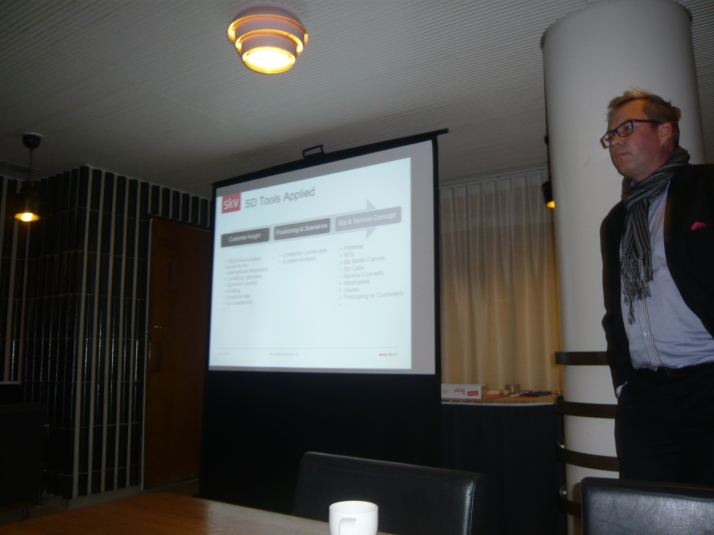 The last presentation was delivered by First Vice President Taina Mäkijärvi about the successes and pitfalls of managing a development project with SD tools. Nordea hired an SD agency to plan a workshop with their customers regarding the tools to be applied. Everyone who took part loved it and said to go ahead. So they designed a Service design training course and engaged a professor from a German university in the process. After having cooperated with an external SD coach who tought them how to approach customers, they now train their own people within Nordea to interview clients and think outside the box.

Our group´s achievement in the independent group work

After that, we were split into three groups and each group concentrated on one subject related to SD. My group was given the following task: How to get everyone work towards customer centricity in the organisation? We came up with a number of ideas and devided them later into 9 themes. Each theme has approximately ten ways how to get everyone to cooperate towards customer centred services. Here you have the results of our group´s brainstorming whirlwind. 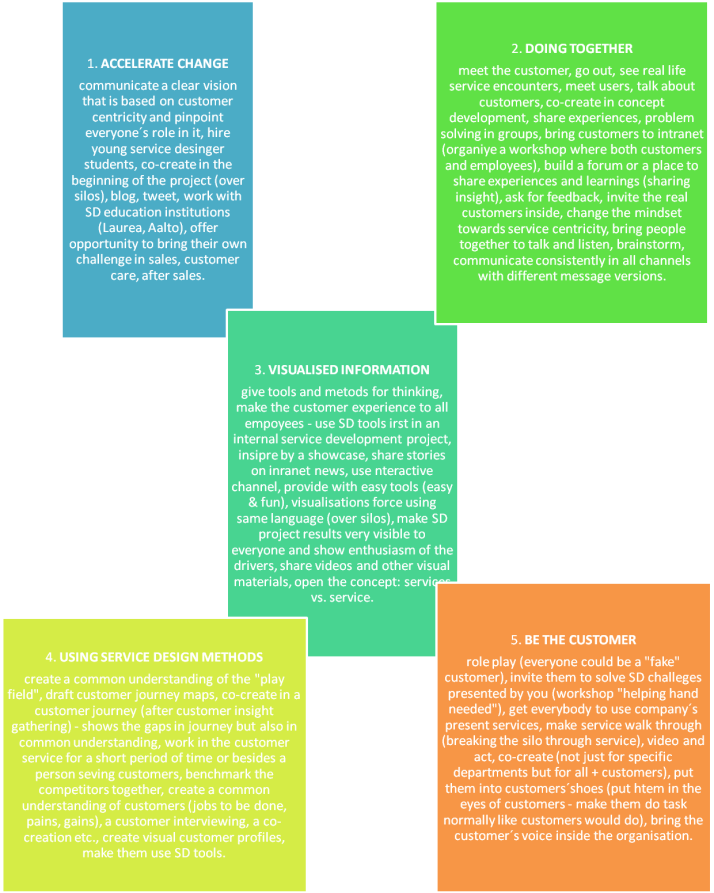 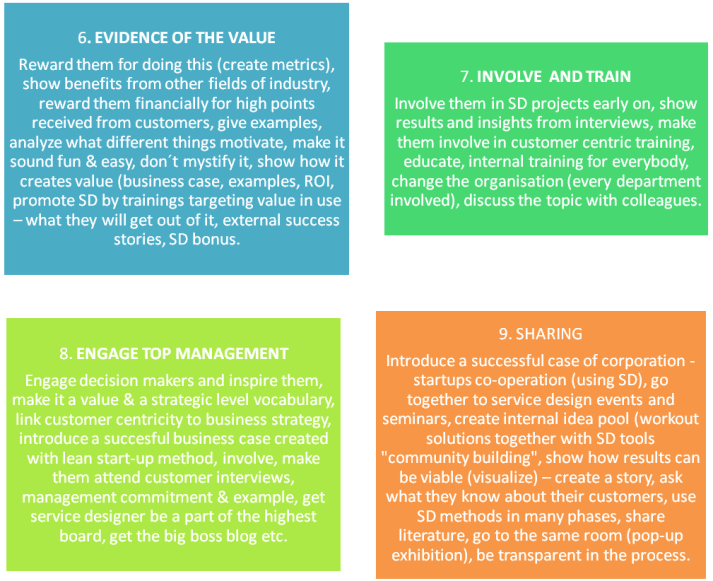