I participated in the first Global Governmental Jam that was held in the fancy ICT House (pics in the end of post) in Turku on the 5th and 6th of June. The idea of the service jams was familiar to me: we were supposed to create as many prototypes of new (public) services as possible in 48 hours. The jams abroad had been started already the evening before. However, the “common theme” was to be released only on the 5th, at 9 a.m.

We had to decipher the text (left) in order to reveal the theme. It couldn’t be anything as square as an anagram, so our team depicted funnels (cones) representing a new kind of customer service process – and a symbolic drag queen (transfering customer identity). 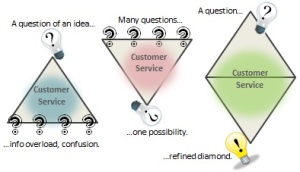 Then we were told to create a prototype of a service around whatever we had come up with the text. So basically there was no common theme, unless the biggest common nominator “public service” counts as one.

Only later we were explained the phrase “Here be dragons” that is a medieval metaphor for dangerous or unexplored territories.

Apparently, the purpose was to make public services less frightening and more approachable. Our service was to transform the employment office into an office of opportunities, where customers wouldn’t have to feel ashamed of visiting.

The prototype, the pilot, was a one year opportunity to change one’s status from unemployed into “a status of choice”; the ultimate goal being getting rid of the term “unemployed” altogether. See Prezi here

On the first day we went through the ideation phase and defined the customer journey. The day ended well; the organizers offered some insights and guidance, and there was a clear vision of what to do next.

The team dynamics and the composition of the team caused discrepancy on the second day. The team lacked leadership and groupthink affected the decision-making. We were unable to move on to a more focused presentation of the service. Instead, we reversed to the mood board and added new dimensions to our concept. Suddenly, the focus had shifted from a prototype of the service to a motivational video for downshifters.

A team’s success requires commitment to a common goal. Our objectives were not aligned. Three were there for the experience; one was learning how to compile a video. I was the only one with a genuine interest in using service design methods to create a (simple) prototype of something feasible. I got cornered in my attempt to reason.

The product of our team’s two days’ work on the subject of unemployment was a video that contained a unicorn, hint of Alice in a Wonderland and self-recorded “Somewhere over the Rainbow”. It was too big a file to be uploaded on The Global Gov Jam 2013 server for everyone to see (by 3 p.m. on the 6th).

The jams are based on peer review, but some structure and leadership is required when people come together for a serious cause. It is trendy to try to act aligned as community, but people still need structure to process information and to behave appropriately in a group. Hence, in addition to theories, guidelines and good practices, there are countless books on service design methods and tools, one cooler than the other. 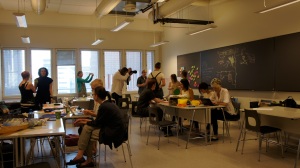 Nevertheless, I can see why doing is emphasized in service design, and in the jams. It is a successful and efficient way to work, when all the team members have ownership of the goal and mostly know what they are doing. Orientation and talking is required, where the less devoted people are concerned.

I’ve been reading a brand new book on service design which explains this issue rather perfectly:

The point of difference for any specific service is how it is delivered. We think of this as the performance of the service. — If we use a musical metaphor to compare the service to an orchestra or a rock band, we can think of quality of performance in terms of how well all the musicians came together to deliver the music. Music is an interesting metaphor in this regard, because — each musician must play to the best of his or her abilities, yet at the same time play in harmony and keep time with the others. Things can quickly go awry if each musician simultaneously tries to play as a soloist. (Polaine, Loevlie & Reason 2013, 32.)

Jamming requires even more concentration than a concert, since the participants are expected to improvise AND keep up with the others at the same time. It gets chaotic instantly, when the harmony is lost.

I was left with two questions. Are the jam organizers also facilitators in the jam? Why isn’t the global dimension of the jam better highlighted? There could be more interaction between people in different locations, since technology already enables international live presentations.

On the other hand, the technology shouldn’t have too big a role in the jam, because it tends to steal the attention from the more important things. I would even go so far as to recommend the team work to be unplugged and the facilitators the only ones allowed to document the jam produce online. At the moment there is such hype around service design in general, that the content is easily suppressed by the form.

This blog post was created as an assignment of the course “Current Topics in Service Design” by a SID Master Program student Tiia-Marina Silva (BBA in IT and Bachelor in Social Services). Pictures on the courtesy of Michael Diedrichs and Annaliisa Salmelin.

See all the videos (BSSS – digital buss stopping system , ServiceStar – digital doctor’s appointment system and “Drag On”) and more in You Tube:  http://www.youtube.com/user/ServiceJamTurku 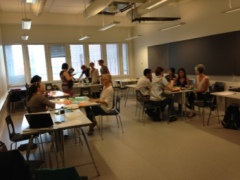