The opening keynote speech of Mr. Marko Ahtisaari in Interaction16 conference started with a piece of music. And not just about any piece but recently recomposed Vivaldi’s Spring part of the Four Seasons. How appropriate for any beginning, and especially at the time spring still needs some encouragement to show its face to the streets of Helsinki. It is not by chance that music is chosen to open the event. Mr. Ahtisaari is the CEO and cofounder of the Sync project whose aim is to untap the potential of music as a precision medicine. Yes, you read it right! Music as a highly personalized alternative to pills! A research has shown that music has powerful effect on our brain and can even unlock the people out of the motoric inability caused by Parkinson’s disease. The project is building a platform which will map music characteristics on their biometric effects. The machine learning will then be used on this set to create and deliver personalized music therapy for sleep, pain and movement disorders, to name a few.

In addition to the above wonderful value proposition, Mr. Ahtisaari touched on several other topics and issued several calls for action. What resonated the most is call to shift our attention from User Centricity and Objects to Participation and Systems. We need to finally realize that we coexist on this world and any action we (do not) take impacts environment around us. As Mr. Ahtisaari pointed out, we are heading to the age of Entanglement, where we highly interact with each other. Being only user-centric and optimizing experiences for the (possibly selfish) needs and wants of a single persona might not be enough anymore. This only reinforces the importance of being actively present, connected and constantly learning. In other words, being now-ists and using effectual thinking at least as much as being futurists. Fellow service dominant logic enthusiasts, doesn’t this sound familiar?

Call for action: Participation over user-centricity

Learning to live and co-create with intelligent machines is another must. As Mr. Ahtisaari puts it, we are destined to live in the world where machines will have power to surpass us and shape the world for themselves in a previously unimagined ways. This will mark the end of the era of Enlightenment.

Man and the machine designing together

While we may not be there yet, we are well on our way. In his look at the “dawn of agentive technology” Mr. Chris Noessel, a futurist and veteran of interaction design, classifies artificial intelligence as narrow-, general- and super-AI.

We are currently at the narrow AI stage where we have dedicated AI that either assists us with certain tasks (i.e. acts as a tool) or autonomously does the task for us as a service (i.e. acts as an agent). Examples of tasks where assistive AI may find the obvious use are jobs, connection, physiology, skills and art. Everything else that we have to do can be completely outsourced to the agentive AI. General AI will be the stage where machine can transfer what it has learned from one particular context into other non-related contexts. Super AI is what happens after the point of singularity where the machines become autonomous and start shaping the world on their own. In this state the super AI is to a human as the human is currently to an insect, and it will have to make an extra effort to get down on a level of human for meaningful communication. In that stage humans will simply not have mental models and toolkit to deal with the concepts in the “mind” of super AI. Imagine asking an ant today what does it think about gun control!?

From general-  to super-AI via singularity

Thinking about design itself as an example of a job that can be assisted by a machine is on the agenda of Prof. Antti Oulasvirta from Aaalto University. In his talk “Can computers design?” he illustrated that by formulating UX design as a set of choices to be made from the existing set of alternatives, design can be turned into a mathematical problem. Making choices is subject of general multidimensional optimization, which is well established area of engineering, with well established tools. By using machine learning and predictive modeling to build optimization objective functions (i.e. functions describing human reaction to a certain design), based on existing qualitative and quantitative data, a design problem becomes mathematical problem.

Formulation of UX design as an optimization problem

Designers, it might be time for handgrip-strengthening exercises. Tomorrow you might be shaking hands with your new steel-hand-assistant in the office! 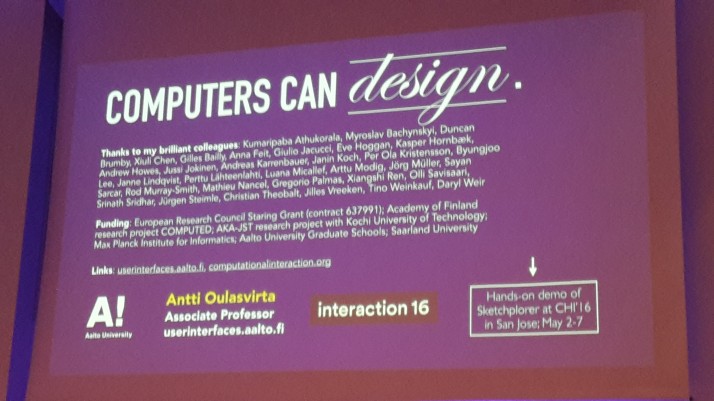 Noessel C. 2016, The dawn of the agentive technology: The UX of soft UI, http://interaction16.ixda.org/session/the-dawn-of-agentive-technology-the-ux-of-soft-ai/, Accessed on 4.Mar.2016