Last week the city of Rotterdam (NL) hosted the latest edition of the International Design in Government Conference.

Previously hosted in London (UK), Oakland (USA), and Edinburgh (Scotland), last week’s edition was already the third happening in 2019, suggesting that the interest in the topic is growing world-wide.

Hosted officially by Gebruiker Centraal (User Needs First), a Dutch knowledge community for professionals working on digital government services, the conference took place between November 18th and 20th and its participation was completely open to anyone.

The International Design in Government Conference aims at sharing best practices, takeaways and discussing common challenges so that they can be tackled through a collaborative approach. In facts, established by Government Digital Service in 2017 as an opportunity to bring together design-minded people that work in, for or with the government all over the world, in the last two years the international design in government community has grown to over 1500 members from 66 countries. In addition to participating to face-to-face meeting occasions such at the conference, community members engage every month in sharing knowledge through calls and other collaborative digital tools, contributing to keep the discussions alive and make some steps further.

I attended the conference on Tuesday, November 19th, where the morning was entirely dedicated to keynote speeches, whereas the afternoon had a more dynamic connotation as participants could choose to attend a wide range of talks, workshops and breakout sessions.

Below a summary of the morning keynote speeches and their related visual notes I made on the spot:

Willem Pieterson is a researcher focusing on the intersection of data, technology and their orchestration with the aim of helping organisations become more innovative and data-driven. Presenting his work on how to better assess the quality of governmental services, he introduced a quality model based on 20 dimensions of quality, which helped defining a service evaluation model that suggests “satisfaction” as the biggest predictor of quality. 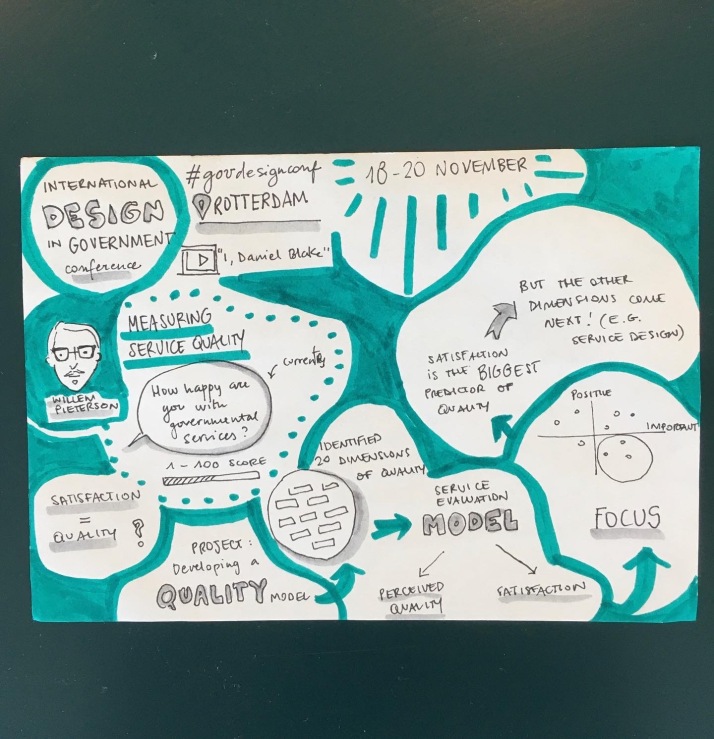 Francis Maude is the former Minister for the UK Cabinet Office. He was responsible for the establishment of the Government Digital Service, with the aim of reinforcing internal IT and bringing all government services onto a single web hub: GOV.UK. By telling the story on how the UK moved from having its digital services spread across more than 2000 government websites to winning the award as “world leader for online and digital public services”, Maude suggested that leadership, capability, and mandate are the three elements to implement a functional reform. Additionally,  the implementation of horizontal, cross-silo functions (by ensuring the commitment of several Departments to redesigning all existing Government services) as well as building a critical mass of technical capabilities were pointed out as the key to execution of such an ambitious strategy.

Maude’s office estimated that moving services from offline to digital channels could save approximately £1.8 billion a year. 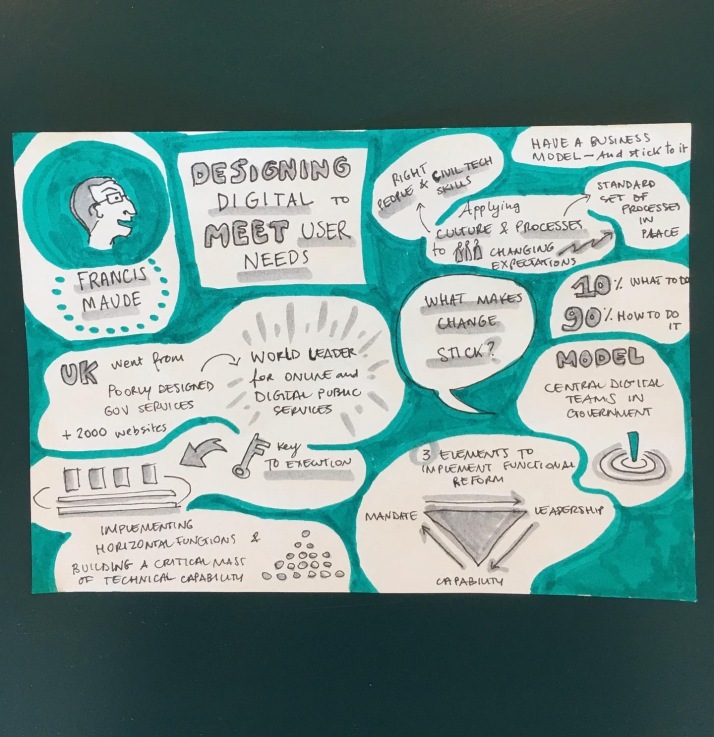 Audrey Tang is listed number 3 in the World’s 100 Most Influential People in Digital Government in 2019. She took office in Taiwan as the “Digital Minister” on October 1, 2016,  and was assigned the role of helping government agencies communicate policy goals and managing information published by the government, both via digital means.

Through her talk, Tang stressed the importance of implementing “radical transparency” in all governmental processes, and highlighted how Taiwan is promoting presidential hackathons as a means to co-create solutions around several topics related to the SDGs. 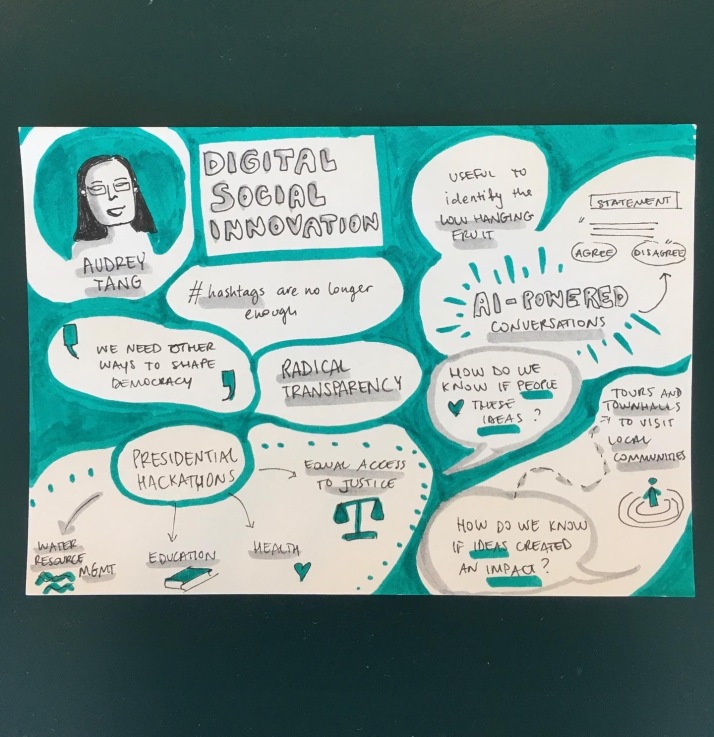 Although I could only attend one day, my brief participation to the International Design in Government was very interesting and it triggered a few considerations that I summarise below:

If only five years ago it would have been unimaginable to have designers in a municipality, now designers working in Government are thousands and, based on the networking I did, most of attendees either knew what service design is or had service designers in their teams. In this landscape, the NL and UK are commonly acknowledged as the two countries in Europe who are the forefront of design and innovation in their governments.

Although public and private sectors are facing similar challenges (such as defeating a siloed mindset), the public sector must deserve some extra attention to designing for diversity and inclusion: in facts, governmental services need to be used by all citizens and therefore must be accessible to all kind of users. Of course, diversity and inclusion should not be considered as an optional in the private sector. However, they often are shadowed by other commercial priorities.

The story of Gemeente (Municipality) Rotterdam, who prototyped and tested visual letters for citizens with learning disabilities in the attempt of delivering a more engaging way for these users to read important communications, tells how this solution turned out to be a success for other citizens too. What we can learn from it is that at times what is designed for a specific target of users might very well apply to other kinds of users too.