The idea is to invite City residents and its partners to join the development of the City, the services, and neighborhoods by enabling of spontaneous activities and creation of equal opportunities for participation with the aim of creating a positive city experience. The model states, that the decision-making in the city should be open and participatory. Helsinki also recruited 7 local workers, “city coaches”, to facilitate participation in each housing area. They help the residents to participate by promoting initiatives and development proposals, creating discussion and being present in their respective housing areas. 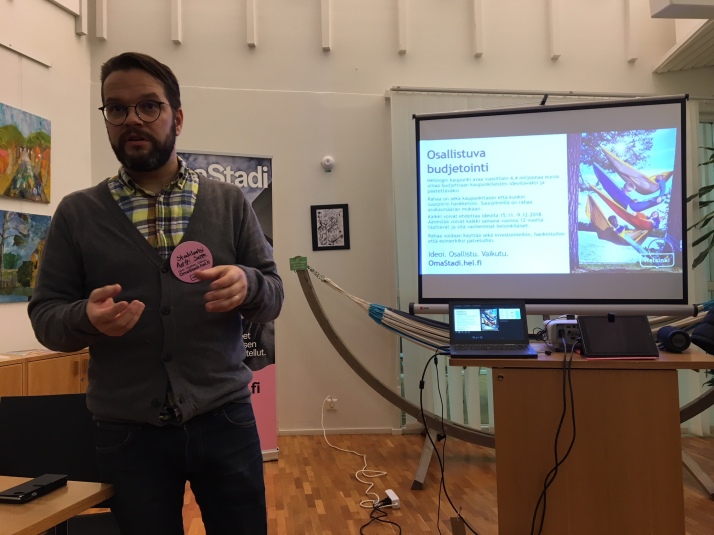 Participatory Budgeting as a Concrete Means to Co-Develope the City

For the residents of the City of Helsinki, a concrete means to participate in developing the city is participatory budgeting. Some 4.4 million euros will be allocated annually to the initiatives ideated by the residents. Some 900 000 euros is allocated to the projects concerning the entire City of Helsinki, and to the 5 greater housing areas have been allocated money according to the number of residents they have. How the budget is spent, is being voted upon, based on the proposals made by the City residents. The voting age limit is 12.

During the autumn of 2018, the city coaches have been promoting the participatory budgeting project, which really kicked off on the 15thof November, when the online service for the resident’s ideas was released. The city coaches have been organizing also co-creative ideation workshops in each housing areas. To help facilitate the workshops, a participatory game called “OmaStadi” was created by the service design company Hellon. 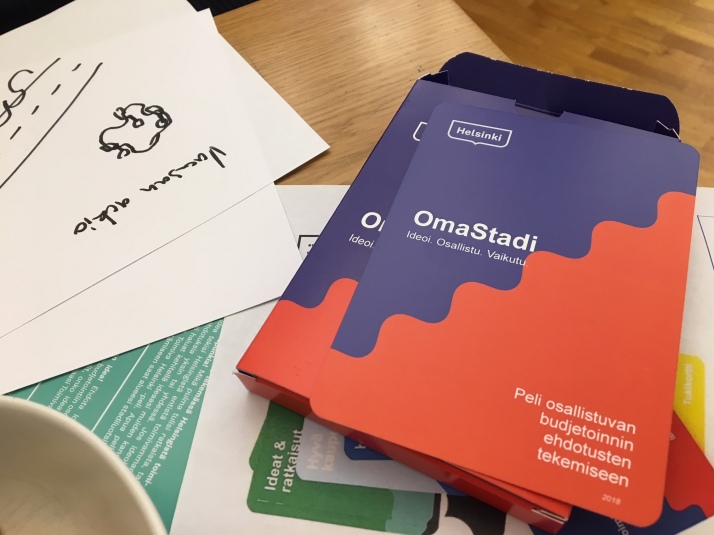 I took part in the ideation workshop organized in my housing area Hermanni-Vallila. Some 20 people attended the workshop, everyone filled with enthusiasm to develop their own neighborhood. After the introduction to the Participatory Model and participatory budgeting in Helsinki, we were handed out the “OmaStadi” participatory game and explained how to play it. We had some 1 h 30 minutes to play the game, with the aim of resulting in 1 to 2 ideas we would then download in the “OmaStadi” online service. 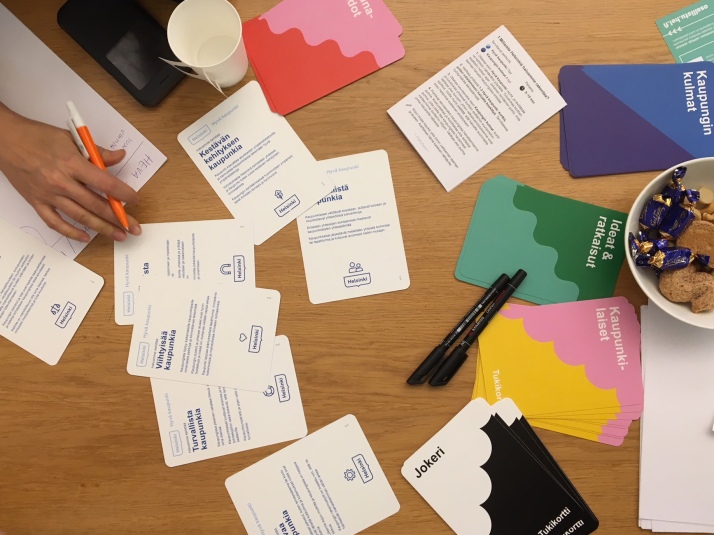 It was time to play! We organized ourselves in teams and prepared for the ideation game by choosing the instructor, the bookkeeper, the joker, and timekeeper. The game began by exploring “the City Corners” cards and choosing 1 or 2 areas on which we concentrate on ideating. Then we had a free-flowing discussion on the challenges of the areas chosen with the aim of choosing one challenge we want to solve. In the second phase, we had some help in ideation using “the Ideas & Solutions” cards. We brainstormed ideas first individually and then collectively. We also used “the City Residents” cards to open up new perspectives on our ideas.

In the third phase, we used “the Precondition” cards to validate our ideas with the preconditions of participatory budgeting. We had to choose 1 to 3 most suitable ideas or further develop ideas to fit the preconditions. Next, we used the “Good City” cards to test which of the ideas work towards the City’s objectives and scored the ideas if they fitted the objectives mentioned in the cards. The more the idea was given points, the better possibilities it has to succeed in the process in the future. We had to choose the idea that scored best and was perceived best by our team for elaborating. Lastly, it was time to present the idea to the City of Helsinki. All teams presented their ideas and wrote them down to an idea sheet. The bookkeeper is responsible for downloading the idea to the OmaStadi online service.

The ideas varied from enhancing a playground nearby to taking over an old tram hall for creating community house and to a thorough concept of enhancing the Vaasa square in Kurvi including infrastructure changes, plantation of trees, organizing events such local food market and flea market, starting a community house, cooperation with local businesses, and hiring a community worker (“Talonmies”) for the square. We had such fun!

How to reach people?

The OmaStadi cards are available also in Swedish, English and in plain Finnish (“selkokieli”). In the event, there was also a group of residents who didn’t speak Finnish. This group was facilitated by a voluntary organization Nicehearts and their Neighborhood Mothers division. The City of Helsinki organizes ideation workshops also in English, but this kind of organizations volunteer to help facilitation also in some workshops organized in Finnish. They said the experience was inspiring also for their group English-speaking group.

However, it can be asked how democratic the participatory budgeting actually is? Who are willing and able to attend open ideation meetings and workshops? Do they reach all the citizen groups, especially the ones with something hindering the participation? Has the message of participatory budgeting even reached all residents? A lot has been done to tackle these issues: the ideation workshops are normally open, but the City also trains some people to facilitate the game so that it can be played in housing cooperatives, among friends, etc. The City also brings the ideation game to different groups of people who have some hinders to take part otherwise, such as retired and disabled people, schools, etc. What can be discussed, is the communication about participatory budgeting in the first place. Many people do not know anything about it, at least this is my impression when I have talked to my friends and networks. So, this is one thing which the City of Helsinki needs to develop in the next round.

After the period of leaving the ideas to the online service, the ideas will be translated/modified into coherent plans in co-creative workshops and meetings organized in March-April 2019. The City residents are invited to the workshops. In addition, the budgets for those plans will be made during that period of time by the City of Helsinki. In May 2019, the voting of the plans will be organized, and in June the implementation of the voted plans will start. The people who have been crafting the initial ideas can take part to the implementation.

Participatory budgeting is an interesting initiative, and the City of Helsinki has taken a significant step towards open and participatory decision-making, not so common even globally. Can’t wait for the next workshops elaborating on the selected ideas, and finally the voting in May to come!