What stayed with me for all these weeks, was the inspiring figure of Katja Tschimmel, explaining us how better results could be achieved, if Design Thinking was to be applied in more disciplines or professions. Passion is easily transmitted and while exploring the depths of the Evolution 62 model in action, it grew stronger. Here is what I’ve learned in our sessions.

What is Design Thinking?

While in the past design had been associated mainly with the shape characteristics of an object and speaking of design would inherently lead to the conclusion that the reference concerns an artifact, nowadays the term has acquired a broader sense that includes a wider range of applications and disciplines. An accurate definition of D.T would be that of Michlewski (3): “Design Thinking could be described as a movement that promotes the philosophies, methods and tools that originate in the practice and culture of the design professions.”. The definition succeeds to incorporate D.T’s philosophy in a short but comprehensive sentence. D.T attempts to transform existing conditions into preferred ones, create a better version of the world we live in, achieve innovation. It focuses on synthesis and is abductive in thinking (a term used by R.Martin) (2,) with a great concern for the human factor. D.T fundamentally changes traditional ‘’institutionalized logics’’ (5). For designers, failure is accepted (1), emotional language is encouraged (5), linear thinking is replaced by mind mapping (1).

How does it work?

We should envision D.T as a problem solving method, which follows mainly, but not only, the following steps (SDT Model) (4):

Step 2 – Creation: Rapid prototyping and brainstorming, embracing failure as a prerequisite for success.

Step 3 – Reflection: Narrowing down of proposals, focusing on those that have proven more functional during the previous phase. Further building and prototyping.

Step 4 – Implementation: Communication and testing of the proposal, prototyping material from previous stages applied in practice.

Further variations and visual models exist. Other than the Evolution 62 which was applied in full during our sessions (fig.1), the 4D (or Double Diamond) model by the British Council, IDEO’s 3I and HCD models and the Hasso-Platner model are the most representing D.T models. 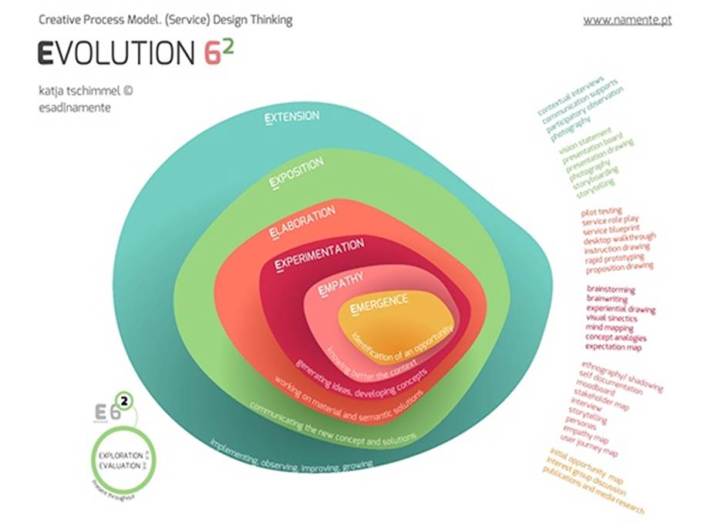 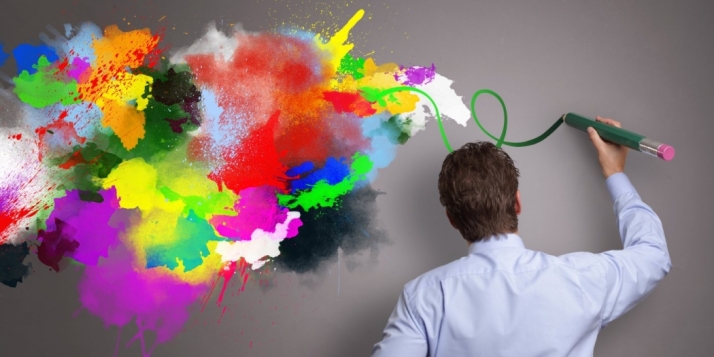 The use of sophisticated tools during the D.T process is essential. Since no universal process exists but each case requires ad-hoc designing that better suits its unique characteristics (4), designers may occasionally apply the use of different tools to increase effectiveness. Therefore, in some cases Mind, Persona and Empathy maps might be more efficient whereas in others Visual and Semantic Confrontations, Storyboards or Storytelling are more up to the task. The amazing effects that D.T tools can create, is vividly described by T.Brown (1), when he analyses the extraordinary impact that the Cool Biz project has had in Japan back in 2005, a success that few would have expected at the very beginning of the project.

Simply put, D.T is an end to old ideas (1). It is all about learning how being a designer is different to thinking like a designer. And hopefully, in a year or two, it will be up to us to apply that thinking in practice and design solutions.

2.Martin, Roger 2009. The Design of Business. Why Design Thinking is the next Competitive Advantage. Boston, Massachusetts: Harvard Business Press.

4.Tschimmel, Katja 2012. Design Thinking as an effective Toolkit for Innovation. In: Proceedings of the XXIII ISPIM Conference: Action for Innovation: Innovating from Experience. Barcelona.

One thought on “Design Thinking – Innovation in progress”