As the winners of Game Jam hosted by Laurea in last September our team Bonfire travelled 29Nov-02Dec to Barcelona Jam Today Fair to participate to Business Game Jam. Originally we were five members in our team but unfortunately two of us, Meiju Mäkinen and Aleksandr Fedorov, could not come along to Barcelona. Aida Hubanic, Roman Filippov and I were trusted to represent our game Hungry Cells. With heavy weight on our shoulders but open minded we arrived on the morning of 30Nov to Citilab at Cornellà de Llobregat, Barcelona. There were altogether eight teams from all around Europe participating to this two-day event; from Spain, France, Netherlands, Germany, Italy and Finland. The jury kept all teams busy the whole first day by giving us several tasks to be done within more or less one hour timeframe each.

First we made a business model canvas for our games. Making a business model canvas in such a short time is quite a challenge. We started with our customer segments and value propositions and after that built our marketing strategy around these key issues. We had lot of discussions going on and we also received valuable advice from mentors who were going around helping all teams. Finally we managed finish all parts of our business model and write it down to the poster. It was then presented to jury members and was put on to the wall for everyone to see. 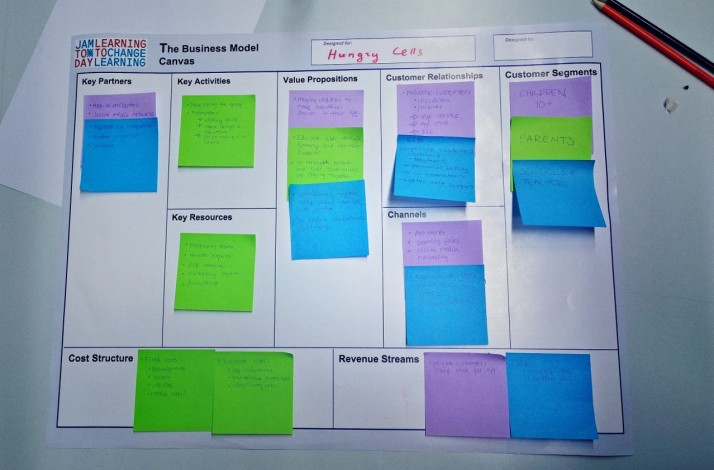 Second task was to create a logo for our game and our company. The logo for the game was taken from earlier designs including name of the game and image of the cute Hungry Cell. For company logo Aida had excellent idea to add some flames from bonfire. The logo was made to be simple, timeless and stylish. With some friendly help from the neighbor team from Netherlands it was implemented in digital format so the co-operation worked well across the team borders as well.

Third challenge was to write a poem that could be sang and it would be promoting our game. For a while we had empty minds but then we all just started to write something down. As a result we had one rap for Hungry Cells written by me and one poem written by Roman. We decided to use both of them, the rap for now and the poem for the evening. Before having lunch all teams were requested to sing their poems to the audience. So it was a real artistic session offered by all teams! During our rap Roman showed his talent in beatboxing and I and Aida rapped by turns all seven verses. Judging from the big round of applause the audience seemed to like our rap.

We were very well taken care of by our hosts. The atmosphere was really friendly and inspiring even though some pressure was given to all teams by mentors and judges to make us do our best and even more. For refreshment there were coffee, drinks and snacks served all the time. For lunch we had buffet with various tasty meals to try. After lunch the last task took us back to our childhood some many years ago as we were given a package of cereals, scissors, tape, string, some paperboard and fabrics. Our assignment was to create a tempting package to sell our product. We decided to make the package to be in round shape. It was covered with pink fabric which was the closest we could find to the original color of our Hungry Cell. Eyes and the cute smile were made of cardboard. One hour was going really fast with this enjoyable task where we all had our hands on.

The evening event was held at the city center at ENTI (Escola de Noves Tecnologies Interactives). It is amazingly beautiful historic building where all teams had three minutes opportunity to pitch their games to the jury and audience. We saw impressive performances as all teams put all their effort to market their games the best possible way in such a short time. We presented Romans poem like a short play to describe the idea of our game and then we had a quick slide show for marketing purpose. After cocktail snacks and bubbles all teams were rewarded for their performances. The last team to reward was our team and the jury had chosen us to be the best team at the Jam. What a great ending to such a hectic day!

Barcelona at its best

On second day we had a chance to participate to conferences and panel discussions, present our game and try other teams’ games. During our stay Barcelona showed us its best sides as sky was clear blue and sunny. So we really enjoyed the light and warmth those few hours we had spare time. On evenings walking around the city center’s narrow streets, tasting Spanish tapas and making some shopping felt like an enjoyable break after long dark autumn in Finland. Overall the experience was great. Our hosts had arranged inspiring jam and Bonfire made excellent team work sharing all the ideas and effort. Thanks to our team and thanks to Citilab and ENTI for this great event and experience!