There are some things in life that you need to experience yourself in order to truly understand them – Jamming is definitely one of those! You simply can´t capture the spirit of Jamming with words. Any attemp would result in lines full of superlatives and corny phrases, and in the end, readers would think you have worn the ”funny hat” for too long. Well, that´s totally ok and not far from the truth, but that wouldn´t do justice for the concept.

I could tell you that Global Service Jam is a unique 48 hour event for curious, open-minded people interested in (service) design thinking. It gathers Jammers from 6 continents, from more than 100 cities to simultaneously design completely new services in a spirit of experimentation, innovation, co-operation and friendly competition. At the end of the weekend, prototypes of the new services are published to the world. Global Service Jam is known for it´s inspirational spirit that captures and connects the global network of over 2000 Jammers.

Or I could point you to a video. Our Jam got challenged by the New York Service Jam to make a happy dance, and here is our response:

After watching the video, your first thought might be something like ”say what?” But I urge you to hold your thoughts. In fact, if you look closer, what you can see in the video, is a group of people who have been totally taken over by the spirit of the Jam – you can almost taste the collective fun and openness! And these people were strangers to one and other before the Jam started. Just within two days, an unique atmosphere has been established. Atmosphere that frees people to be themselves, think unorthodoxically, experiment, play and build on one and other´s (crazy) ideas.

Ok, just like business, Jamming is not all about fun and (crazy) ideas. It´s also about testing service design tools, researching, analyzing, prototyping, testing the prototype, listening the feedback, prototyping again and in the end you feel exhausted. But what makes Jamming different, is that all this is done in a spirit of having fun! It´s the key ingredient in creating the atmosphere that unleashes peoples´ creative potential. Once you feel like everything you say doesn’t have to be smart and overly analyzed, there´s room for real out-of-the-box thinking and inventions. Importantly, intuition is granted access to the playground! 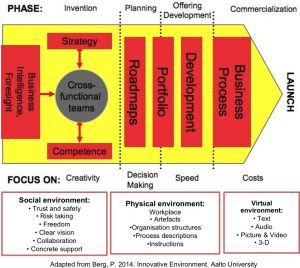 Sadly, the atmosphere I just described, seems to be given way too little attention in discussions related to innovation and innovativeness. Frequently, innovation is approached as a ”spiritless tunnel”, a process, that starts with some research and ends with commercially viable output. This linear approach is commonly known as the ”innovation funnel”. The role of practices, organizational structures and IT infrastructure is emphasized. “Softer”, social aspects – culture, communication, collaboration and team building among others – are only shortly pointed to when discussing “the enablers of innovation”.

Personally, I find bypassing the social aspects of innovation with an annotation, same as trying to climb into a tree your butt ahead. Think of yourself building a house. Would you begin with establishing walls, painting them and placing tiles, before you have done the footings properly? Hopefully not. Even though you might be able to get the walls standing, your construction would be far from solid.

Don´t get me wrong, obviously you need to be methodologically equipped. But it is not enough. Same as with building a house, you first need to make sure that the footings are sound. In innovation, the social aspects – shared vision, culture, trust, collaboration, freedom, are the footings. They form the fertile soil for all the activities, processes and practices related to innovation.

Unfortunately, I have encountered organizations that have great innovation processes and IT infrastructure aimed at supporting innovation, but have an organizational culture that inhibites people from expressing their ideas out loud – ”I haven’t done any viability calculations yet, so it´s better to stay quiet than encounter the attack towards my idea”. Not too many ideas to be prototyped and tested… 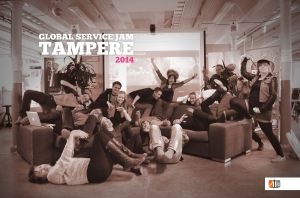 One of the organizers of Tampere Service Jam, Mikko Väätäinen, said it well: ”If you want people to free themselves and be playful, you personally have to go 50% over the aspired level. That´s the way to give people an assured feeling that they won´t make themselves a laughing stock.” In other words, facilitators play a key role in setting the tone. If they are curios, giddy and playful, and even able to laugh at themselves a bit, it frees Jammers to do the same. Same applies in business setting – be the change you want to create. 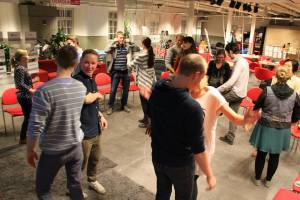 Think how much better place to work your company would be if everyone followed this quideline, instead of entering situations with their egocentric agendas in their minds. Jamming is all about making other people shine. The fundamental goal is to co-create an unique experience for everyone, not to outweight others. As this common goal is continually emphasized during the Jam, the Jammers become glued together and helping others becomes a norm.

This list could go on and on. But as I said in the beginning of this blog post, Jamming can´t be described with words. Thus, I urge you to go and experience the Jam yourself. Check out the coming Jams from the global website. To have a further taste of Jamming, see the opening video of 2014.

Finally, the GSJ Tampere would not have been possible without the organizers, the sponsors and the Jammers – thank you all! Special thanks to our hosts Mikko from Solita and Anna from Kolmas Persoona for sharing your inspiration and expertise.

One thought on “Getting steamrolled by the Jam! #GSJTampere#Innovation#Happy”