After introducing the Service Experience Camp 2018 in a blog post earlier I am now sharing insights from a few open sessions I attended at the event.

This session was meant for those who had already facilitated design sprints “the Google way” and was hosted by one of SXC organisers, Manuel Großmann. We shared insights from design sprints we had run in very different settings, issues we had faced, how we had solved them and if we hadn’t, others could suggest their solutions to overcome certain challenges with the process. 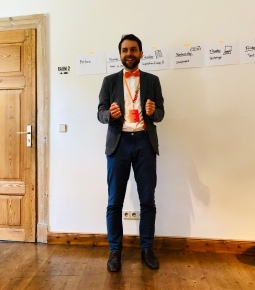 I was able to share learnings from design sprints I have run as I have facilitated them in a variety of settings including both public and private sector and many kinds of problem areas. Participants mentioned hacks such as:

Other valuable tips can be found in these photos: 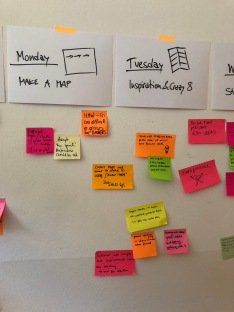 This session was a mix of a lecture and group work about three mental shortcuts that cause biases in the design process. These biases were confirmation bias, the bandwagon effect and the Ikea effect.

During the group work we discussed how these biases could be avoided and prepared a short presentation about our topic, the bandwagon effect, for the others. 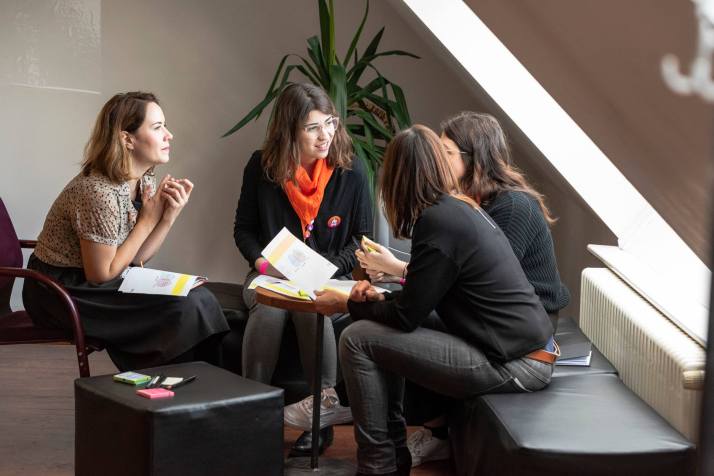 Bandwagon effect is a very common bias, often prevalent in focus groups or basically any group decision situation. It’s that “if everyone supports it, then it must be right” thinking that often leads to people sticking to the status quo or choosing an option just because more experienced people around them choose it even though they actually think that another option is better. This is why I personally use a lot of silent brainstorming exercises, silent voting and silent commenting – these facilitation methods are actually also used during the above-mentioned design sprint process.

The presenter slides – including the group work canvases and a few informative slides – can be found on Slideshare.

Here are a few of the workshop cards:

“If you’re an amazing listener, people will tell you secrets. As a service designer, finding out the secrets of service experiences enables you to craft delight.”

My favourite session was this one by Frankie Abralind, an experience designer from Sibley Memorial Hospital. He was also one of the keynote speakers but in his open session he talked about his passion rather than his everyday work.

Frankie’s passion is to delight others – especially terminally ill patients at the hospital – with poems that he writes on spot with an old-school typewriter based on stories people tell him. Frankie has already started a movement with this work that once began with a “Free custom-made poems” sign in the hospital cafeteria and a few patients that came to him who were deeply touched by his poetry.

What made Frankie’s session so good were not just his amazing presentation skills but also the fact that we could see that he was very moved by his encounters with the patients and that he wants to share his skills – listening and writing – with people who need them the most.

Frankie urged us all to spend more time listening instead of talking and to give some of our time to listen to those whose voices don’t often get heard.

Frankie has done some videos of good and bad listening to showcase how important it is to really listen, you can watch them on Vimeo.

Read more about Frankie’s movement at: poetsinresidence.org and at: freecustompoetry.org

Photos by Ninja Fedy if not stated otherwise.

The topic of the fifth Service Experience Camp was “Crafting delight, delivering value” and it was organised in Berlin on November 2-3, 2018. The concept of this two-day event is a so-called unconference: a highly interactive event where service design professionals from all around the world gather together and learn from each other. This year’s camp offered a lot of interesting but relatively short key talks as well as peer-to-peer open sessions that were organised by the participants more or less spontaneously, on the spot.

The first day of the camp started off with an introduction by the organisers Katrin Dribbisch, Mauro Rego, Martin Jordan, Manuel Grossmann and Olga Scupin (photo below, from left) – a lovely bunch of people behind service design initiatives such as the Service Design Berlin community and a print publication, the Service Gazette.

The agendas of the two days looked like this before the camp started and the empty slots got filled by the open sessions: 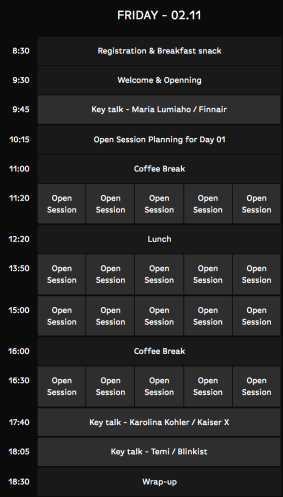 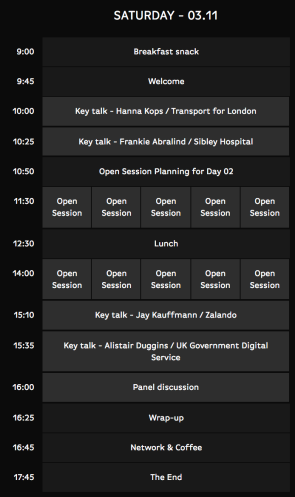 Maria Lumiaho, Design Director at the Finnish airline company Finnair, was the first guest on stage. Her talk was mainly about how they built up design capabilities and an in-house design team of 90 designers in just a few years and shared some personal experiences like how she as a new employee had asked for a slackbot being created to translate all the acronyms that were used in the airline business. 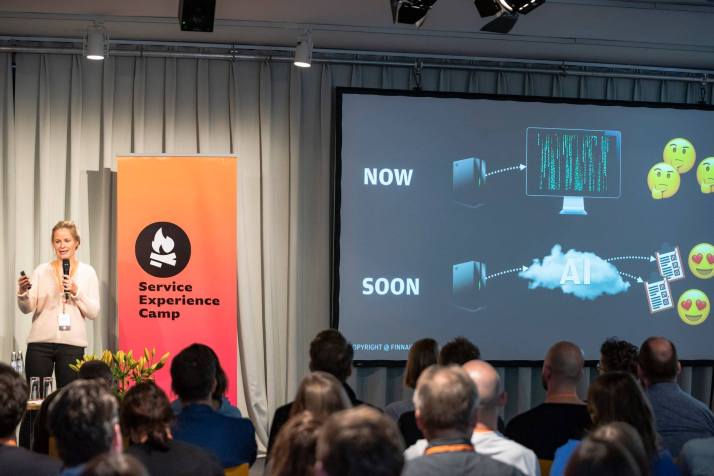 Finnair has to constantly be on top of different cultures and cultural changes all over the world as the company is targeting so many markets with Helsinki as a connection point between the East and the West. She encouraged all of us to start reading Chinese newspapers and reminded us how customer insights come from “all corners of the organisation”, not just designers.

Slides from the talk can be found at:

The first key talk was followed by a call-to-action for the open sessions. Anyone in the audience could come up to the stage and pitch their idea about a 1-hour session on any topic. These session topics were then divided into smaller spaces at the event location, Kalkscheune in Berlin, and participants could freely choose the ones they were interested in. The format of the session was free: open discussion, workshop, lecture or a mix of these. 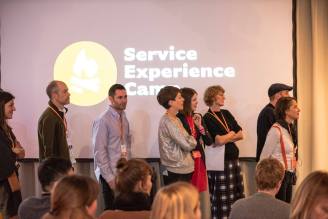 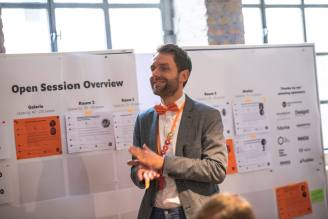 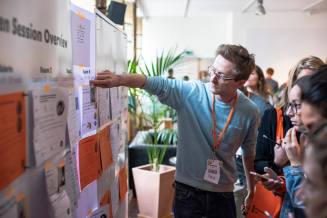 More key talks were given throughout the camp days by:

The camp ended with a panel discussion and a wrap-up where the keynote speakers shared their thoughts on current topics in service design. What stuck for me was Hanna Kops’ comment on how important it is to give designers space to do their work. I personally see lack of “empty space” to allow for creativity to flourish as something that is often missing in design projects.

The panelists also pointed out the importance of storytelling: telling about the value you are creating so that users understand it and business people can tell it on when you are not there to justify the design decisions that were based on real user needs. 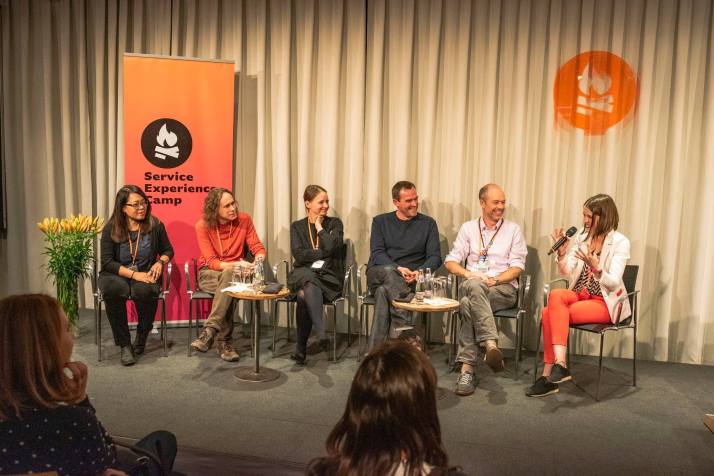 All the key talks are likely to be shared on Service Design Berlin’s social media accounts so keeping an eye on those will pay off if you are keen to learn more. Most of the slides from the key talks and open sessions can already be found at:

https://www.slideshare.net/ServiceExperienceCamp (including slides from this and previous years’ camps)

and the official photos at:

Thanks for reading! Next up will be part 3 of my series “Designers share”.

I’m on a personal mission: to start sharing knowledge in a more agile and transparent (aka. quick and dirty) way.  My first step on that path is a video I made about a Service Design Tour in Berlin. A first step in sharing insights from conferences and meet-ups that have been stuck in my mind, notebooks and laptop for way too long!

Service Design Tour is an initiative that organises visits to design agencies across Europe. Until now, the tours have been organised mainly for students to bridge the gap between the academia and professional world. According to our host for the day, Kevin Fox, this tour was the first one organised for design professionals and as a satellite event for the Service Experience Camp. Other attendants came from around the world, including Asia, North and South America, Australia and Europe.

As knowledge sharing and personal development seem to be a on-going discussion in many design agencies I chose to make a video about the topic during the tour. I asked our hosts at the tour stops the following questions: “How do you share knowledge?” and “How much time do you use for personal development?”. Watch the video below for quick interviews on the topic and get a glance at the office space of four Berlin-based design agencies: Service Innovation Labs, Fjord, Aperto and Idean!

Creativity is still seen as some special power that only few of us possess. The brothers Tom and David Kelley, founders and owners of world-known design firm IDEO, have been pioneering in trying to break this impression by empowering anyone to be more creative. And gaining creative confidence even among the most business-minded people seems to be slowly breaking through; I heard just a few days back a member of the board of Finnair – the Finnish airline company – state before an audience of hundreds of people how anyone can learn to be more creative. Or in fact, she was compelling for the leaders of the biggest Finnish companies – even the government – to bring more creativity to the boards and to the decision-making of Finland.

The Kelley would probably add to the sentence “anyone can learn to be more creative” the word “again” as they are emphasizing in their book “Creative Confidence” that basically all of us have embraced our creativity as children but have learned to lose the confidence in this skill and the ability to be proud of our creative work bit by bit as we have grown older. In this same book, the brothers introduce many exercises to regain more confidence in creating and being creative. I was planning to introduce some of the most concrete ones in this post but really, the book is a quick and joyful read so I would instead encourage everyone to get a copy of their own and start bringing more creativity to their lives, little by little. It gives the bigger picture of the state of the creativity problem and explains the background of the Kelley brothers and their reasons for writing the book.